"The spectrum suggests that the surface is hot and dry. It is surprising that we saw no traces of water ice," said Dr. Laurence Soderblom of the U.S. Geological Survey. "We know the ice is there," he said. "It's just well hidden."
-- NASA/JPL NEWS RELEASE April 7, 2002

For readers unfamiliar with the contact between the space probe "Deep Impact" and the comet "Tempel 1" which happened on July 4, 2005, here is a replay.

The idea was to hit a comet with something massive, to see if comets really were "snowballs" -- as was suggested 60 years ago by Fred Whipple who coined the phrase "dirty snowball." The comets have been held to be distinct from asteroids and meteors (they are not), because there was no accounting for all the water on Earth without some extraterrestrial delivery system. After all, other planets and moons have no water or very little water. Earth has a lot. Only comets, on their wild orbits, could actually reach Earth.

Additionally, it was assumed that the enormous tails of comets must be ice sublimating to water vapor due to the heating of the Sun (the sunward side of a comet may reach a temperature of over a hundred degrees Fahrenheit). This theory reached conviction when hydroxyl (OH) molecules were identified in the tails of comets, and remained in vogue even after it was recognized that the Solar Wind which shaped the glowing coma and tails of comets -- the long stretched-out streamers -- produced them by combining Solar Wind protons (H+) with cometary Oxygen (O-) ions released from silicates.

Comets were also held to be "dirty," that is, covered by dust, because a comet consisting of ice or snow would reflect sunlight, and the icy material would never sublimate to form a tail millions of miles long. 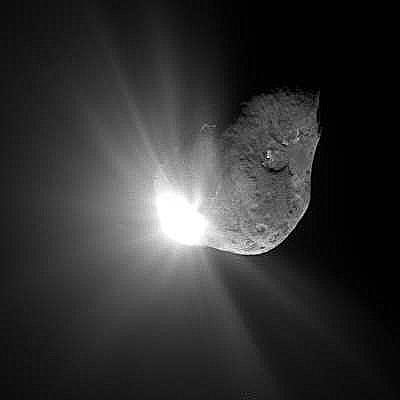 [Image: Comet Tempel 1 moments after impact by the probe from the spacecraft Deep Impact, July 4th, 2005. After NASA.]

All of this consists of a picture drawn by an eight year-old. The comets become bottle rockets leaving smoke trails in space -- at times 100 million miles long (the largest objects in the Solar System), coming from an icy object less than a few miles across. At times there are dual tails, spikes pointing toward the Sun, tails moving away at right angles from the main body, and curved horns at the front. But most of these other displays have been neglected. How could a comet a few miles across form a coma as large as the diameter of the Sun -- 864,000 miles -- and a tail longer than the distance from the Sun to Earth?

There is obviously something wrong with this description. What is even more wrong is the conviction that comets represent the coagulation of the dust of the primordial Solar System, and that these represent the formation of a planet or planets which had gone wrong.

Never mind all the contrary data, the space probe "Deep Impact" was going to close in on the comet "Tempel 1," fire a 800-pound copper projectile at some 35,000 miles per hour, and record the sequence of events both from a camera mounted on the projectile and from the spacecraft "Deep Impact" passing by at a safe distance of some 800 km. It was fully expected that the projectile would penetrate the comet, or would start a new "sublimation" point which would gush water vapor into space for the next 1000 years.

Neither happened. In fact, nothing happened to any expectations, and the community of researchers was left scrambling for new theories.

Only a few people made correct predictions. They were based on very simple concepts: (1) comets are rocks, and (2) the interactions would be electrical.

I made some predictions, first in March of 2005, when I became aware of the Deep Impact mission, which I posted somewhere on my site on July 3, 2005. I predicted that at best only a small crater would be made. NASA expects a crater the size of a football stadium, over 150 feet (50 meters) deep and 250 feet (85 meters) in diameter. I also predicted that most likely the disturbance of the comet's electrical field by the approaching probe would cause an inrush of electrons speeding ahead of the arrival of the probe, causing an explosive arc at the impact location well before the probe arrived, as a sudden lightning stroke from the comet to the probe, ending in a brilliant green flash as 800 pounds of copper were vaporized.

Nothing quite as spectacular as the green flash happened, although the predicted pre-contact flash happened. Thornhill predicted the same thing (not the green flash) a day or two later, on July 5th. I do not need to claim primacy, however, because the flash would be completely predictable from an electrical standpoint.

Thornhill rightfully took some pride in predicting the pre-contact flash, and the world's media descended on him in the week after the mission. But as soon as he was identified as a Velikovsky follower, all interest evaporated, and the media packed up. This may have turned Thornhill from ever again wanting to be associated with the name of Velikovsky. But here also was a missed opportunity, for to have been able to tell the media that what happened was so obvious that any number of electrical engineers, physicists, or astronomers would have arrived at the same conclusion. This would have ameliorated the Velikovsky contamination.

I should also point out that a brilliant object in space traveling toward a spaceship had happened before. I recall an incident where a spacecraft, on approaching a moon (a planetary satellite), recorded what looked like a missile traveling at high speed from the moon. The space ship lost radio contact a second later. I need to find the source for this.

I wrote:
"Let me hedge my bets: If the probe makes contact with the comet, that is, if it makes a splashdown, it will provide a large blotch of copper to act as future site of any of the sporadic bursts of plasma that the comet now undergoes periodically."

Wrong again, sort of. What actually happened went completely beyond all expectation.

I wrote:
"It is also possible that no significant fireworks display will be seen. Comet Tempel 1 comes to perihelion outside of the orbit of Earth, and originates from the space beyond Jupiter. Its charge is likely to be mostly equalized to the local electrical field of the Sun, as can be seen from the small jets of plasma which are only sporadically emitted."

"But I can certainly predict expected mainstream reactions."

... and listed the following:

Added note: This was a joke, but two months later NASA is suggesting that perhaps the other marks on the comet, which are normally assigned to impacts, might be due to underground "icy volcanic eruptions."

I wrote:
"We will again be left with nothing proven. Stay tuned."

That turned out to be correct.

On July 3rd, 2005, a day before the impact, the Saturnian Group also made some public predictions for the impact of the 800-pound projectile fired at Comet Tempel 1. See the TPOD by Wallace Thornhill at [thunderbolts.info].

Specifics were listed as follows (abbreviated by me, with some comments added in square brackets):